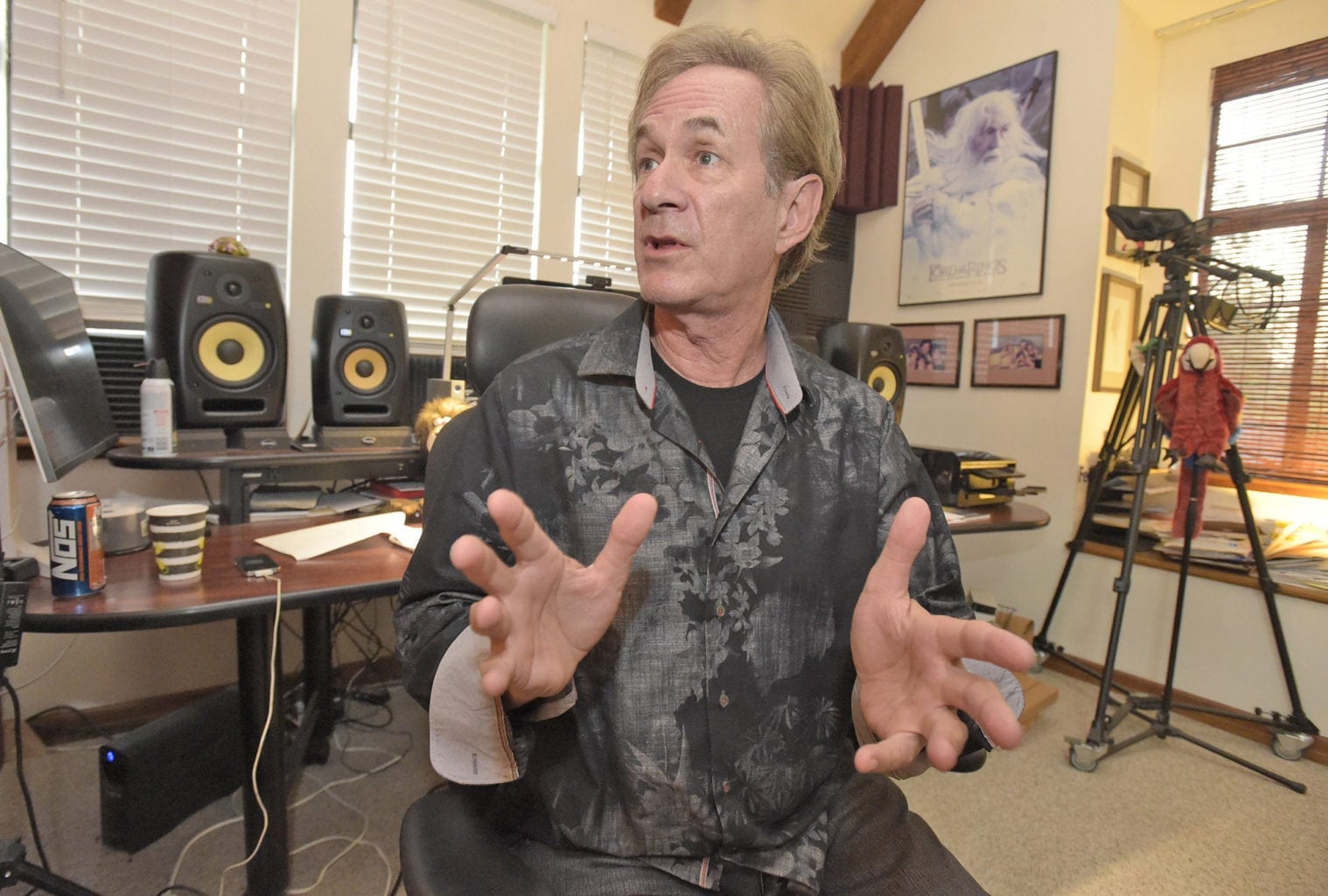 Dan Balestrero: The Voice Maestro of the SCV

As the sunset bathes the nearby striking rock formations of Vasquez Rocks Natural Area in warm yellow and orange light, nearly a dozen of Dan Balestrero’s voiceover students arrive at his nearby Agua Dulce home for their weekly class.

Balestrero’s Azzurra Media Ranch is a warm Tudor home decorated with film memorabilia and movie posters. It is also outfitted with top-of-the-line studio equipment. His Wednesday evening professional voice-over training class includes students of all ages. “We just had a 75-year-old recently record his voiceover demo,” Balestrero said. Students must be age 18 or older, but occasionally minors will be allowed if accompanied by parents.

Balestrero moved his business, masteringvoiceover.com, to Agua Dulce from Marina del Rey seven and a half years ago. “This is more of the environment I wanted for my own creativity and a setting to teach people,” he said. He discovered Agua Dulce by chance. 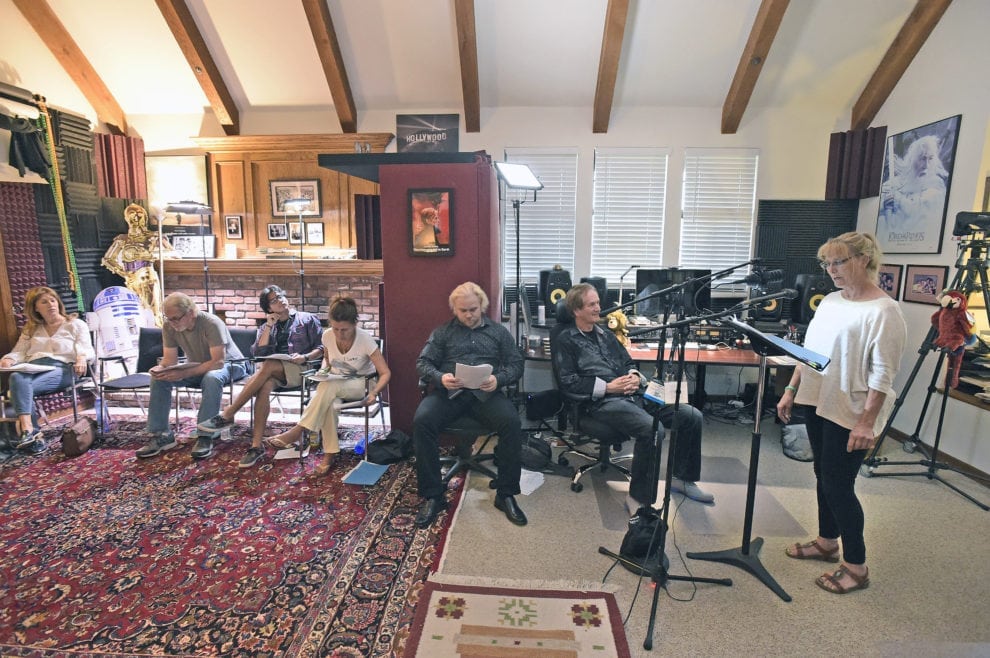 “I came up here to shoot some stock footage at Vasquez Rocks,” Balestrero said. “I had never been here before. We started looking around the area, it’s not that far from L.A. and it is up at 2,500 feet and the air is clean.”

Balestrero and his wife of 15 years, Dagmar Liepa, MD, bought the home on five acres and Balestrero set up his studio.

“We were in Marina del Rey for five years, we had a lovely condo by the water, but found that even though West Hollywood is only six or seven miles away, it would take people an hour to get there. The idea was to live close to everything, but nobody could get there,” he said. “We thought it was time to do something different. I was worried that people wouldn’t want to come this far out but I’ve discovered that people from the San Fernando Valley enjoy coming up here from the valley.”

Balestrero grows fruit trees and a vegetable garden on the property that he shares with students, which is also home to five pet goats, adults Sheldon and Leonard and kids Crimpy, Stuart and Raj. Fans of the “Big Bang Theory” television show may wonder why there is no Howard. “Crimpy was going to be named Howard, but he was born with a bent ear, so he had to be Crimpy,” said Balestrero.

Balestrero was born in Palo Alto, Calif. and graduated from San Jose State University with a Master’s in acting and directing. “I sang for a number of years, I did Shakespeare plays for years and by the time I was 35 I had done 50 different productions in various places,” he said.

He lived in Chicago for five years and taught opera and musical theater singers and was a guest master voice coach and acting coach at the San Francisco Opera for six years. Balestrero said he realized that he knew how singing, speaking Shakespearian text and voice development intersected.

“I sort of backed into teaching and have been teaching voice, in some version, for 40 years,” he said.

Balestrero said the opportunities for voice-over work have exploded exponentially in the past few years. “When people ask, isn’t it competitive? I answer, yes, it’s incredibly competitive, but what isn’t?” he said. 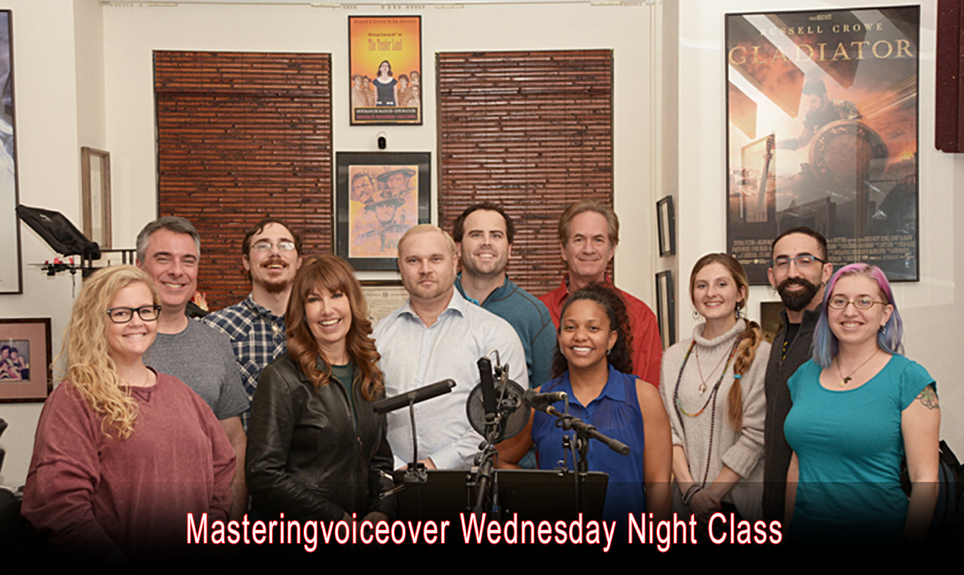 When the average person thinks of voice-overs they think of commercials, movie trailers, cartoons and animated films. But voice-over work extends to many areas of modern life, said Balestrero.

“Everything is being digitized and somebody is narrating it. This is the great age of voice-overs for me. There’s never been a better time than now,” he said. Voice-over work includes audio books and nearly every recorded voice you hear, including background voices on film and television.

Listening to Balestrero’s melodious voice it seems impossible he once had a severe speech impediment. Yet, that experience set the stage for his work years later as a voice-over coach.

“When I was 9 I remember being in the speech therapist’s office and her face is burned into the rods and cones of the back of my retina I liken a damaged tattoo from a nuclear blast,” he said. “I remember her leaning forward and saying, ‘NO! NO! Can’t you hear that you are doing it wrong?’ I remember at age 9, thinking to myself, there has to be a better way. And that was the beginning of me hunting around and learning to find that better way.”

Balestrero said his teaching techniques include “support, feedback and laughter because that’s how people retain information.”

Balestrero compares the spoken word to music. “The whole gig for us is to use variations of cadence and melody to solve problems of meaning and articulation,” he said. “We have to become masters of those skills."

“If you want to make A-list money you better have A-list skills,” he said.

“It is important to be supportive but also be relentless on what the standard needs to be so you are not enabling delusion,” he said. “You have to be able to read like your demo when you show up on the job.”

His classes include a “pizza break” where students enjoy a snack, visit and network before heading back before the microphone.

“I’ve seen people hired in this business who might not have the best voice, but they are easy to work with and deliver clean ‘reads’ consistently,” Balestrero said.

He said it is important to teach not just the mechanics but also the jargon and social skills involved in the job. “If they don’t know how to navigate the industry all the classes in the world won’t get you hired,” he said.

At a recent class Balestrero listened carefully as each student stood before the microphone practicing the voiceover craft. He was quick to give praise where due and constructive criticism as needed, many of his comments were delivered with a wry and casual sense of humor.

“I tell the people that are studying here to be voice-over artists that the most important work you’ll ever do is the first time you talk to somebody on the phone who might hire you. They are calculating, friend or foe?” Balestrero said. “Over 90 percent of communication has nothing to do with the actual words you’re speaking. It’s all about the harmonic geography of one’s tone of voice and how that’s used. Your voice is the engine that carries your ideas to everyone else on the planet. It’s one of the most important things we do, yet tone of voice is astonishingly overlooked.”

Balestrero is the author of “Everything I Needed To Know I Learned In Hell: Some Thoughts on Turning Darkness Into Light, or How To Escape The Mess You’ve Made.” His 103-page book is available on Kindle and Amazon.com. It is a guide to overcoming self-defeating mindsets and a reminder everyone is responsible for their own success or failure.